"For me, the most the poignant aspect is the personal stories, the ordinary people who were swept up in the tumultuous sequence of events that hot August day and how life for them, and for Manchester, changed forever."

In partnership with the School of Social Sciences’ Sociology department, and as part of city-wide bicentenary commemorations in 2019, The University of Manchester Library has recently digitised a unique collection of documents reflecting the events, and aftermath, of the Peterloo Massacre.

On 16 August 1819, a radical meeting of around 60,000 people at St. Peter’s Field, Manchester was violently suppressed by the Government.

At least 15 protesters were killed that afternoon and 700 seriously injured. Spectators were brutally cut down by mounted cavalry wielding sabres, others were trampled by horses and panicking crowds.

As news of the traumatic events circulated, it acquired the satirical name ‘Peterloo’ – a reference to the bloody battle of Waterloo, only four years previously. 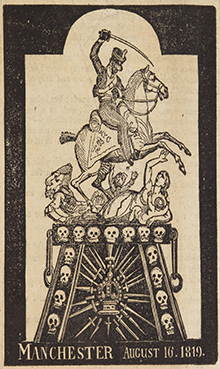 ‌This set of material provides a range of perspectives on that day’s tragic events and its legacy.‌

It includes a full run of the radical newspaper, the Manchester Observer (1818-1822), whose editor, James Wroe, was closely involved in organising the ill-fated meeting.

For the next two years the Observer held the authorities to account, collecting eye-witness accounts in painstaking detail.

Another highlight is the Peterloo Relief Fund book. Recognised by UNESCO on the UK Memory of the World Register, it lists names, addresses and injuries of those caught up in the massacre and the amount of money paid to them.

The collection also includes papers, letters and placards collected by Rev. William Robert Hay, a leading figure on the magistrates' side. Various maps and plans of the site give a sense of where St Peter’s Field was situated in relation to buildings present today.

The University of Manchester Library has digitised a unique collection of documents, books and newspapers relating to the Peterloo Massacre.