The newspapers and periodicals from this period are key to understanding contemporary and present day events in Iran.

The 1997 election of Mohammad Khatami made clear that a significant proportion of the Iranian people –   particularly the youth, women and intellectuals – wanted reform to the country's governance and raised expectations of a new era. This resulted in a period of relative liberalisation from 1997-1999, which was informally dubbed the "Tehran Spring".

The date of the election itself, Duvvum-i Khurdad, saw the birth of a new political movement that sought gradual reform and better relations with the West. This new optimism proved short-lived. The conservative establishment responded to the country's new political force by targeting the movement's leaders with violence, repression and occasional forced exile. Furthermore, Khatami's cautious nature and his seeming reluctance to mobilise his vast support base left many of his followers disillusioned and at the mercy of his political foes.

The main legacy of the 'reform' era is represented by hundreds of periodicals and newspapers, which cautiously and at times daringly, pushed the envelope on themes such as freedom of expression, political pluralism and relations with the United States.

This project aims to progressively include some of the key publications of that era. 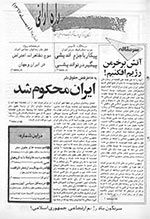 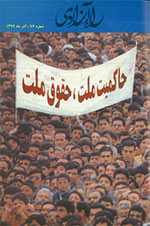 ‌‌These publications were set up in the late 1980s by a group of dissidents who left the Tudeh Party after its reconstitution in Europe in the mid-Eighties and formed the Democratic Party of the Iranian People, under which aegis both publications emerged. The former published around 36 issues, while the latter produced around 120 and was suspended at the end of the Nineties.

Besides contemporary political analysis, both publications contain a valuable set of memoirs by former members of the Tudeh Party and its military network, particularly on the period preceding the coup of August 1953 against Mohammad Mossadegh.

These publications are not yet available to view online.