Iran and the 1979 Revolution

The newspapers and periodicals from this period provide a unique insight into the causes and consequences of the Iranian Revolution of 1978-79, a phenomenon which has yet to be fully explained. This largely peaceful revolution eventually replaced the order of the Shah with a system of governance ruled by the clergy and headed by Ayatollah Khomeini.

The root causes of the revolution are complex and remain a subject of academic debate. But what is clear is that the period of the Shah's rule saw profound socio-economic changes in Iran, in large part driven by oil revenues. A near doubling of the population was accompanied by rapid urbanisation and increasing inequality. Socio-economic pressures and rising inflation, combined with pressure from the Carter administration in Washington to address human rights and rein in the Shah’s notorious security service (Savak), resulted in growing dissent by the end of 1977 and set the stage for the revolutionary fervour of the following year.

By the time of the Revolution the press was finally free of the muzzles of the Savak and regained much of the vigour and dynamism lost at the time of the August 1953 coup. Between the fall of the Shah on February 11, 1979 and the end of that year the press enjoyed what is referred to as the 'Spring of Freedom', characterised by dozens of new publications.

This lively and unique period in Iranian history is encapsulated by the press of the time, from the various anti-Shah political organisations which had emerged from years of repression, to tabloid dailies that juxtaposed gossip and light content with the celebration of the "martyrs" of the struggle against the monarchical regime. Press freedom, however, proved to be short-lived as the nascent Islamic Republic began to cement its grip on power. By August 1979 state control over the media was once again complete with the closure of the popular Ayandegan newspaper, which had acted as a beacon for non-clerical revolutionary groups. 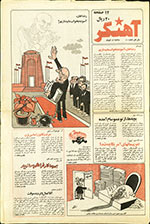 A left-wing satirical publication which had a run of 16 issues in the Spring and Summer of 1979, Āhangar (Ironmonger) was an attempt at resurrecting its legendary forefather Chalangar, a satirical journal linked to the communist Tudeh Party in 1950-53.

Partly formed by staff members of its predecessor, Āhangar produced famed cartoons lambasting the Provisional Revolutionary Government of Mehdi Bazargan and decried the drift towards the Islamisation of public life.

It was banned, together with approximately 40 other publications, in the first wave of restrictions and state censorship of the press in August 1979. 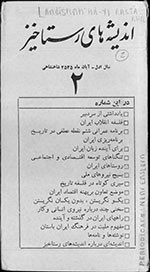 ‌The theoretical journal of the Rastākhīz Party of Iran, formed in 1975 by the Shah in an attempt to organise political life along single-party lines, Andīshah hā-yi Rastākhīz attempted to provide an ideological bedrock for the regime, including treatises on policies and reforms long favoured by the monarch, such as land and industrial reform.

Andīshah hā-yi Rastākhīz had a run of 8 sporadic issues before closing down as the activities of the Party were suspended in the autumn of 1978, as revolutionary fervour gathered steam. 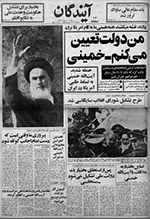 Āyandigān was one of the most widely read newspapers in Iran during the rule of Mohammad Reza Pahlavi (1941-1979). Following the short period of press freedom that followed the 1979 revolution the newspaper acted as a beacon for non-clerical revolutionary groups but was eventually banned by the new Islamic regime of Ayatollah Khomeini. This resource, therefore, provides a unique insight into the political, cultural and social attitudes in Iran during the last 12 years of the Pahlavi dynasty and the nascent revolutionary period (1967-1979).‌ 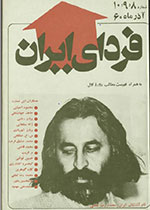 ‌‌This periodical was published between 1979 and 1982 by a group of journalists loosely aligned with the communist Tudeh Party. With an intellectual and current affairs focus, it ran a feature article in every issue in which a prominent intellectual, whose photograph would appear on the cover and who would often be linked to the Tudeh Party, would be interviewed or discussed at length.

The content of this publication diminished in the latter part of its life as Tudeh Party activities became severely curtailed. Nevertheless, it contains a considerable amount of in-depth articles on post-revolutionary arts and literature. 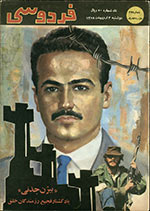 Firdūsī was one of several prominent periodicals which re-emerged after years of state censorship and suppression in late 1978/early 1979, as the mechanisms of control over the press by the Shah’s regime broke down in the face of the increasing success of revolutionary activity.

This present run of Firdūsī includes the issues published in the waning days of Shapour Bakhtiar, the last prime minister of the Shah, and the spring and summer of 1979, when Firdūsī fell prey to the same wave of closures which affected Āhangar, Āyandegān and Tehran Mosavvar, amongst others.

Despite repeated efforts by its founder and editor, Nematollah Jahanbanui, Firdūsī has never been republished. 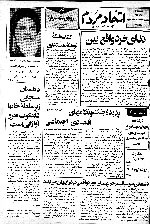 Published as a continuous set, Sugand and Ittihād-i Mardum were monthly publications of a front organisation for the communist Tudeh Party, the Ettehad-e Demokratik Mardom-e Iran (Democratic Union of the People of Iran).

It was edited by the head of the Ettehad, Mahmoud Etemadzadeh (Behazin), a prolific writer and novelist. While maintaining a line of loyalty to the Tudeh, both publications contain a considerable amount of short literary works and poetry of high quality.

The total print run of both amounts to 140 issues. Ittihād-i Mardum suspended publication shortly before the suppression of the Tudeh in early 1983. 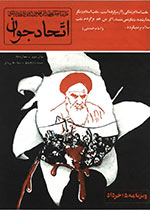 ‌Ittiḥād-i javān and Javānān-i imrūz (Youth Unity and Today's Youth) were amongst numerous weekly publications which emerged in the lively period of press freedom during the revolutionary fervour of January to August 1979.

Although essentially tabloid in style, these publications provide useful day-to-day news coverage on topical issues, including stories on the Pahlavi family's extravagance and accumulation of wealth.

These collections, therefore, provide considerable insight into the mood and interests of the readership during this period. 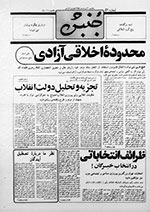 ‌A publication produced by the eponymously named political movement, Junbish was published between 1977 and 1980 and carried the writings of a restricted group of left-leaning secular intellectuals which occasionally engaged in a syncretic fusion between socialist tenets and egalitarian and radical strands of Shiism.

Junbish’s contributors included figures who drafted the early texts of the Islamic Republic’s constitution and influenced the final text. It published around 100 issues before suspending publications in 1980. 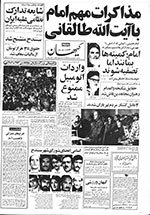 ‌The nation's second-oldest continuously publishing daily, Kayhān, established in 1942, is a newspaper of semi-record, comparable to the Times or the Telegraph in the UK.

Its distribution and importance made it a key instrument in the dissemination of political and social news in the 1979-1981 period, where it initially operated through an editor-in-chief secretly aligned to the communist Tudeh Party, before being expropriated by a clerical parastatal foundation which has been managing it since.

It is an essential tool for the study of any period of contemporary Iranian history. 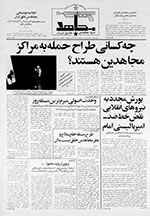 ‌The official organ on the Mujahidin-i Khalq organisation, a Marxist-Islamic political movement which witnessed its apex of popularity and only period of overt activities in Iran during the time in which this periodical was published, 1979-1981.

Mujāhid carries the viewpoints of the Mujahidin-i Khalq, as well as commentary and perspective on the heady and crisis-ridden first two years of the Islamic Republic, particularly on the confrontation between Bani Sadr and his clerical rivals.

128 issues, some of which were clandestine, were published before the Mujahidin’s leadership fled abroad in the summer 1981. 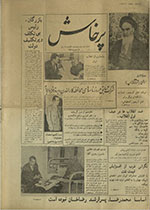 ‌‌‌Presented here as part of the ‘revolution’ series, this periodical was published in Isfahan and Tehran by Ahmad Anvari, a noted supporter of Prime Minister Mohammad Mossadegh. It reflected views from across the political spectrum of the National Front, the broad umbrella organisation which gathered several political groups and individual supporters of Mossadegh. Parkhash’s first series ended with the coup d’état against Mossadegh in August 1953.

The run presented here was published in the spring and summer of 1979 by Anvari who kept the periodical’s logo from the first series. This run provides an insight into the stance of the National Front vis-à-vis the emerging Islamic Republic as well as reflections on seminal events of the Mossadegh premiership, including the July 1952 uprising and the coup d’état. Parkhāsh was banned in August 1979 after publishing a commemorative issue on the August 1953 coup. 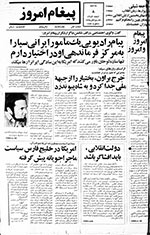 ‌A long standing daily publication of the Left, Pighām-i Imrūz was edited during the collapse of the Shah’s regime by Reza Marzban, a celebrated journalist of high calibre.

Pighām-i Imrūz espoused a decidedly tiers mondiste position on international affairs and led the opposition to the perceived American dominance of the Third World.

A haven for non-conformist leftist activists and intellectuals, Pighām-i Imrūz was banned alongside Ahangar and Ayandegan in the first wave of clampdowns on the press by the new Islamic Republic during the summer of 1979. 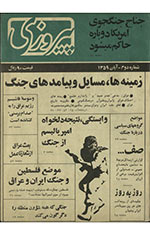 ‌Pīrūzī was a short lived news magazine founded by veteran journalists, many of whom came from the mass circulation newspaper Kayhān. The main editor of the newspaper was Mehdi Sahabi, a Kayhān staff reporter who was expelled from the paper alongside other secular leaning colleagues when the newspaper was taken over by pro-Ayatollah Khomeini supporters in the spring of 1979.

Pīrūzī features satirical commentary which follows a general left leaning but independent slant, particularly on issues such as the situation in Iranian Kurdistan or relations with the United States. Pīrūzī was published in six issues in 1980 before being forced to suspend publication due to political pressure. 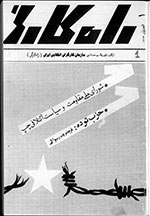 ‌The organ of the eponymous political movement, Rāh-i Kārgar (Worker’s Way) was a Marxist publication of a group of academically-oriented intellectuals who formed the group in 1979 as an attempt to introduce and propagate the theories of prominent thinkers such as Poulantzas.

Alongside the main publication, Rāh-i Kārgar published several special analyses of the political system, one of which achieved notoriety and was titled Fashism: Kabus ya Vaqiyat? [Fascism: Dream or Reality?].

The 1979-1980 run of Rāh-i Kārgar, now considered very rare, was followed by several runs in exile. 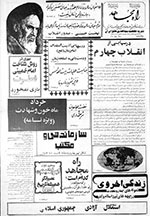 Rāh-i Mujāhid contains valuable memoirs and information on the militant religious opposition to the Shah in the 1960s-1970s. It was published in approximately 90 issues in the 1980s and early 1990s. 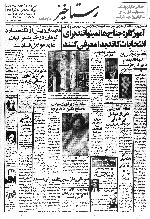 ‌The official daily newspaper of the eponymously named Hezb-i Rastakhiz-i Milli-i Iran (Party of the National Resurgence of the Iranian People) was published between 1975 and 1979.

Besides printing official communiques and proclamations, Rastākhīz carried considerable information on the national organisation in the various regions of the country, and attempted to woo leading thinkers and intellectuals by hosting “roundtable” discussions in 1977 and 1978.

It was wound down after approximately 1060 issues in autumn 1978, as the revolutionary fervour was gathering pace. 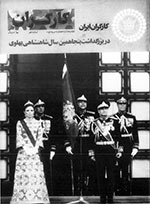 ‌A supplement of Rastākhīz, this publication carried a corporatist view on labour organisation and worker rights, and was published during the same time span as the main newspaper. 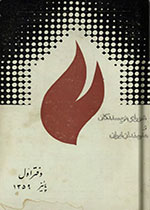 ‌‌This was the official publication of the Shurāi-yi Nivīsandagān va Hunarmandan-i Īrān, a break-away group of poets, writers and intellectuals who were expelled, or left, the Kānūn-i Nivīsandagān-i Īrān, the main ‘trade union’ of Iranian intellectuals. The Shura (council) was led by the noted Marxist intellectual Maḥmūd Iʻtimād Zādih Bihʹāzīn, and followed a political orientation loosely connected to the Iran’s main communist party, the Tudeh Party.

The content of this publication is varied and reflects the extent to which Tudeh Party sympathisers permeated the arts and humanities. The Shura was disbanded in 1983 after the banning of the Tudeh Party. 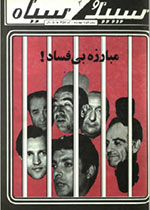 It resumed publication in late 1978, after being banned several years earlier by the Shah's government.

This run is the complete 'Revolution' run, from autumn 1978 until the first collective banning of the press in August 1979.

In addition to its strident attacks on the former regime of the Shah, this publication contains further details on the heady and unique post-revolutionary period. 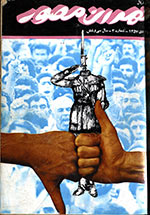 34 issues were published before it was banned in the summer of 1979, alongside the rest of the dissenting press. 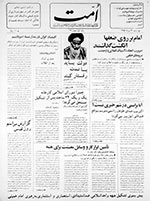 The Organ of the Ummat political group, this periodical emerged in 1979 as the organ of the Militant Muslims Movement, a small religious-nationalist group.

It contains a good perspective on the activities of left-wing religiously-inclined groups of the time.

Ummat was wound up in 1981, as the confrontation between President Bani Sadr and Khomeini’s clerical supporters was reaching its apex, squeezing the rest of the political groups out of the fray.